Cagliari Calcio (Sardinian: Casteddu) are an Italian club based in Cagliari, Sardinia. The club was formed in 1920 and its colours are blue and red. In 2015, Cagliari were relegated to Serie B, the Second Tier of Italian football, since they finished 18th in 2014-15 Serie A season, but two seasons later (2016-17), they managed to make a comeback in Serie A.

Cagliari won their only championship title in 1970, 50 years after the club's establishment. They are known for reaching the UEFA Cup semi finals in 1994.

Cagliari Calcio logo, version prior to 2010, the last according to Wikipedia.

Cagliari Calcio changed their logo and the new design, which will be used from this season (2015-16) onwards, has caused many controversies. It consists of a red shield half, a blue shield half, "CAGLIARI" above the inner white shield and the Sardinian flag depicted. There is a major difference though... All the older versions, even the first ones, were a way to show that Sardinians differ from Italians. How? By depicting the flag "as it is", with the four moor heads facing in the west, thus turning their backs to Italy. The non-localist flag accepted by Italy has blindfolded moor heads facing the east (Italy), which is depicted in 2015 logo.

Cagliari Calcio have appeared in the series since PES 4, the first to introduce a new arrangement of the clubs (and more licensed clubs than its prequel). The Sardinian side haven't been featured in every PES version and their only unlicensed appearances were in PES 5 and PES 2016. Cagliari Calcio's first fake name was "Teste di Moro", which means "Moor Heads" in Italian, those four heads depicted in the logo and in the Sardinian flag. This + the players, who are real ones (and were Cagliari players at the time) + the club colors + the logo similarity leads us to the assumption that Teste di Moro is actually Cagliari Calcio.

PES 2016 became the second game to include unlicensed Cagliari Calcio, not by naming it with the old unlicensed name (Teste di Moro), but as "SR Blue Red", with SR referring to Sardinia, the home region of the club.

Note: Some fake names have survived all those years, e.g.

Some others have changed at least once, e.g. 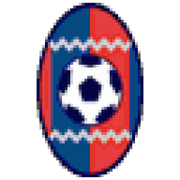 Somehow though Cagliari disappeared from PESM and was replaced by Cluesusritchi, a generic club with a flying donkey in its emblem, a South African (Boer) coach named "Eneal Kuwair" & purple and green as the club colours. Cluesusritchi players don't exist, thus leaving us the option to do whatever we want with this club. Note that in PESM the user can't change any player's nationality. I don't think KONAMI ever bothered to explain why Cagliari Calcio were missing...

Community content is available under CC-BY-SA unless otherwise noted.
Advertisement